God Mode is a throwback to old-fashioned games that took you on a wild goose chase with a gun in hand. This is no surprise as Old School Games is the company behind the title. The new game is currently out on Xbox 360 and will soon be heading to PlayStation 3 by April 23, 2013. 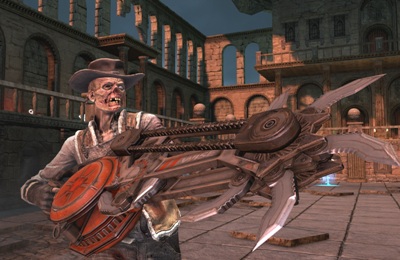 God Mode revolves around an action-packed story, in fact there is not much story to be told. The game puts you in a position to have a lot of first person shooter fun and will keep you busy throughout. Old School Games has tried to keep the action at a high and has purposefully kept the storyline in the background, according to producer Nick Madonna.

According to Madonna, the team wanted to develop the game around an arcade-style of gameplay, while keeping the action light hearted. The graphics of this new title is way ahead of arcade gaming though and the characters are fully equipped with rail guns, plasma launchers, a buzzsaw and a host of other weapons.

Apart from the graphics and gameplay, God Mode also alters the gaming experience entirely in what it calls ‘Tests of Faith’, mostly to make things interesting for the gamer. This title is available on the Xbox 360 for 800 MSP and will be available on the PlayStation 3 for USD 9.99.