It was only a matter of time that virtual reality was introduced into mainstream gaming. There are products available in the market that cater to having a game expand into the entire room with the help of projectors, but nothing that would actually allow the gamer to enter an entirely different world. This will soon change, as the Oculus Rift is set to diversify the gaming landscape, literally. The device was demonstrated at a conference called the D:Dive Into Media, being held at Dana Point, California on February 12, 2013. 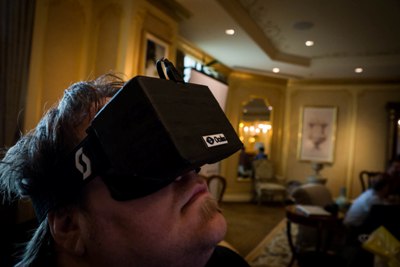 The Oculus Rift allows for a gamer to become immersed into a virtual world, where the game unfolds around them. Physical videogames are slowly becoming a thing of the past, as the gaming world moves to the cloud. This allows for Oculus to make a stand with its new gaming hardware and make the game come alive for the user.

Brendan Iribe, who is the CEO of Oculus VR demoed the headset for the audience at the conference. Iribe said that the 360-degree gaming environment will be something new for the gamer and could lead to some interesting developmental changes along the way.

Since the Oculus Rift is not a separate gaming device, it would need to be attached to a computer so that the game could be streamed onto the headset from the cloud.