Ripstone Publishing released Big Sky Infinity on December 11, 2012, at the costs USD 9.99. Boss Baddie and Voofoo have developed this game that takes you back to the arcade heyday of twin-stick shooting and fun challenges. The PlayStation store will offer this title as an exciting alternative to games such as Sina Mora, even though it may not break records just yet. 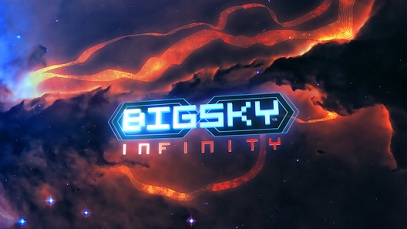 The twin-stick shooting games are not something that the general gaming public looks forward to anxiously as the genre is quite niche. There have been games that have broken the mold though, such as PixelJunk Shooter, which reflects the fact that a lot of time and effort can still be put into developing twin-stick shooters with great results.

Big Sky Infinity has used traits found in various past shooter games, as well as some British Wit to make things interesting for PlayStation. It has good visuals with the aura of space being depicted quite well. The game is decently lengthy, more due to the presence of bonus modes than the storyline itself.

The commentary involves various references to cultural and geek dialogue, which make things quite interesting. The levels can be quite tough to negotiate in keeping with the theme of the arcade experience.

On the downside, the color combinations can be questionable at times, with the enemies blending into the background. This makes it tough to concentrate on what is actually happening on-screen. Another drawback (which could actually be taken as a challenge) is that some levels may appear to be too tough to get through.

Overall, Big Sky Infinity is a great alternative to your regular gaming experience and is definitely worth a shot.