Sony has released their thinnest ever Play Station 3, even as the world awaits the Play Station 4 hopefully by late 2013. The new Super Slim PS3 has a lot going for it such as a great gaming library along with all its previous features; however Sony has decided to retain the old price while making changed such as a cheap looking case, lack of HD cables and an IR port etc.

The latest PS3 is most likely the last design change we will see from Sony before the introduction of the PS4. To start off with, the new PS3 is available in two packages, a 250Gb model for US $270, and a 500Gb for US$ 300. The PS3 Super Slim is a hybrid between the PS3 and the PS3 Slim, measuring 290mm x 60mm x 230mm; as a result it is easier to accommodate as compared to previous models. 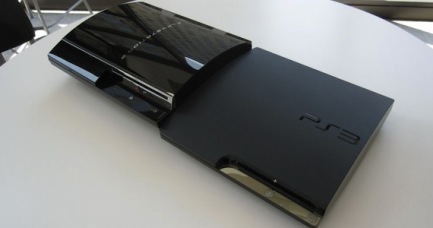 Sony have taken a backward step by implementing a disc cover which is non-motorized, which means that you will manually have to open the cover by sliding it or pressing the eject button. The disc tray is top loaded and can be inconvenient; however the unit can be kept horizontal or vertical as per the previous models.

On the front of the model there are just two USB ports and Sony have left out the infrared port once again, which does not allow remotes to be connected; having four USB slots would have been a good idea as peripherals using USB power could only be on the rise.

The back of the box contain the following interfaces: Ethernet, optical out, A/V multi-out HDMI and a questionable composite A/V cable; questionable as you would not be able to achieve HD signals from a composite cable. A big plus for the new Super Slims are that their hard disk drives can easily be removed by sliding off the side panel and users can insert a drive of their choice as well.

In terms of features the Super Slim PS3 is modeled on its predecessors such as the PS3 and doesn’t offer much in terms of new features barring its smaller size and storage options. For those not familiar with the features of the PS3, it contains access to movies and TV via the PlayStation Store along with a variety of other content based US services. The PS3 scores highly over the Xbox 360 in that it has a very good in house Blu-ray player.

Overall, for someone with an existing PS3 a Super Slim PS3 would not be an added advantage unless space is at a premium. The HDD drive options are tempting but it would be a tough choice to rid your existing PS3 and go for a Super Slim. It would be a great buy for anyone who doesn’t own one and is looking to go in for a new system.