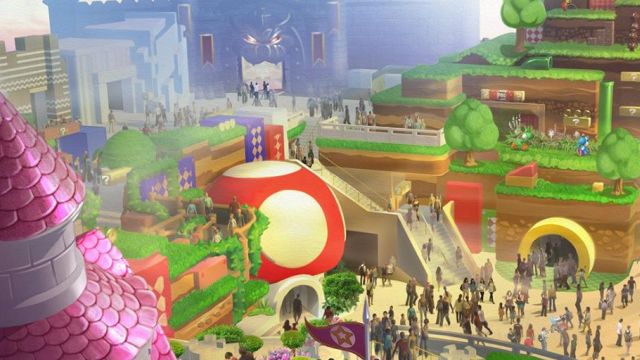 The Super Nintendo World will have attractions that are based on many Nintendo titles and will be located at the Universal Studios Theme Park on Osaka, Japan. On the other hand Nintendo and Universal Studios also have plans to bring Mario and friends to the parks in Hollywood, California and Orlando, Florida. The new attraction by Nintendo is expected to be open for the visitors during 2020 Tokyo Olympics.
A press release has revealed that the development cost for Super Nintendo World is expected to exceed 50 billion yen. The teaser of Universal Studios Japan is dominantly based on Mario and Luigi and also has versions of Bowser’s castles and Princess peach. The company said, “The attraction area will also feature a variety of other globally popular Nintendo characters”. The press release added that the Nintendo characters and the worlds will be re-created with the highest level of quality with a strong partnership between Creative Fellow at Nintendo Shigeru Miyamoto and President of Universal Creative Mark Woodbury.
Nintendo and Universal Studios had announced in November 2016 the early details of the partnership saying that the attractions of Nintendo will be “expansive, immersive and interactive” and will also feature “authentic environments filled with multiple attractions, shops and restaurants.” The attractions of the park will open in the upcoming years.