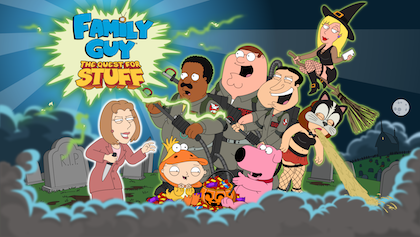 Mobile game Family Guy: The Quest For Stuff gets Ghostbuster content to celebrate 30th anniversary of the show.

Developer of popular mobile game Family Guy: The Quest For Stuff has announced that they are bringing Ghostbuster content to the game, to commemorate the 30th anniversary of the Ghostbuster series. The content will be released as an in-game special event, which will require users to update their game. It is also a celebration of the coming of Halloween on October 31, 2014.

The story goes like this: When Peter Griffin accidentally opens a dark portal inside Quahog, he releases a host of ghosts and goblins upon the city. The residents of the town then wonder, ‘Who you gonna call?” and the answer is: Ghostbusters.

The Ghostbuster theme event will last in Quahog from October 2, 2014 to November 5, 2014. TinyCo., developer of the game, with this content has added a new interface for the players. Tapping on a ghost will “kill it” and players will be rewarded with “soul points” and other materials.

Players can combine the soul points and the other crafting material in a cauldron to make new buildings and characters.

Family Guy: The Quest For Stuff was launched for iOS and Android in March this year and has been moving up the popularity charts since then. This is not the first time that the developers have added famous personalities in the game. Last month, there was a Comic-Con special event which saw Bryan Cranston, Patrick Stewart and Stan Lee come to life in the game.