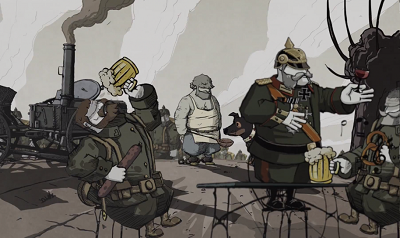 French multinational video game developer and publisher Ubisoft is gearing up for the release of its highly-anticipated puzzle-adventure game set during the First World War, Valiant Hearts: The Great War. The upcoming title will reportedly be launched on June 25, 2014 for PlayStation 3 and PlayStation 4 over the PSN Store, for Xbox 360 and Xbox One over Xbox Live, as well as for PC.

Valiant Hearts: The Great War is inspired by letters which have been written during the Great War and features four strangers who enter the battlefield in order to help a young German soldier find his romantic interest in a story about love, sacrifice, survival and friendship.

The upcoming title uses stunning visuals that are powered by the UbiArt engine. This is the same engine behind Rayman Legends, as well as the magnificent Child of Light, which had its debut in April 2014 on PC and consoles. Valiant Hearts: The Great War is being developed by Ubisoft Montpellier, the same team responsible for amazing titles such as Rayman Origins, Rayman Legends and Beyond Good and Evil, so there is no doubt that gamers will be expecting a lot from the studio’s latest title.

The game is all set to be launched in June 2014 for PC, PlayStation and Xbox platforms. The studio did not announce a Wii U version of Valiant Hearts: The Great War, which does not come as a surprise, considering how quickly Ubisoft is pulling back its Wii U support.