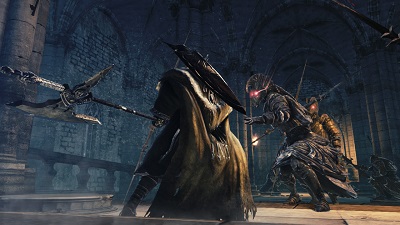 Japanese arcade, mobile and home video game publisher Namco Bandai has revealed that the highly anticipated Dark Souls 2 will be releasing for the PC on April 25, 2014. The studio stated that the PC version of the action role-playing video game set in an open world environment will feature visuals of better frame rate and higher resolution, in addition to supporting controllers, keyboard and mouse input methods for playing.

Moreover, the developer has announced certain pre-order bonuses for those PC users who are intending to purchase Dark Souls 2. If players pre-order the title or purchase its Collector’s Edition via Amazon, Club Namco, Steam or GameStop, they will be allowed to access Black Armor Weapons pack, which will feature weapons that the studio states will provide users an edge over the title’s merciless difficulty from the very beginning.

In addition to this, those players who pre-order Dark Souls 2 will be given access to PDF copies of the title’s art book and comic book, as well as MP3 files of the game’s soundtrack and all of this will be priced at $50. The Collector’s Edition of the game – which will come with a $110 price tag – will feature a download code for Dark Souls 2, a 12 inch Warrior Knight action figure, a cloth map, a collectable metal case, as well as the title’s soundtrack and a hardbound art book.

The game will be having its debut on the Xbox 360 and the PlayStation 3 on March 11, 2014, more than a month before the release of the PC version.