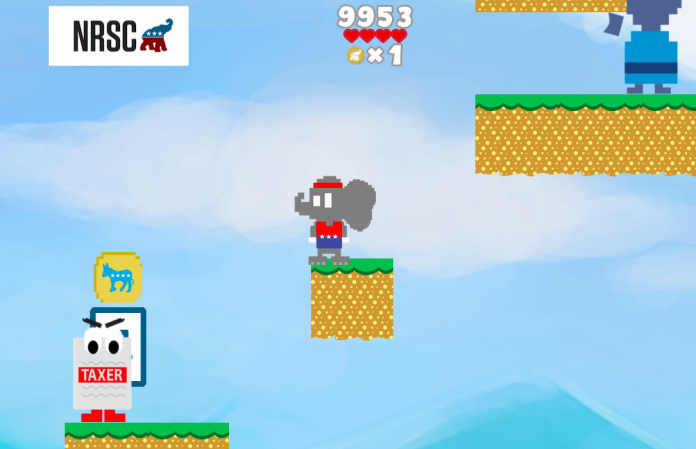 In a bid to win back the Senate, Republicans launch ‘Mission Majority’ – a video game.

The National Republican Senatorial Committee (NRSC) has made an 8-bit video game called Mission Majority, in which one plays as an elephant called Giopi and as the name suggests, the goal is to win a majority in the senate. It’s a free game but requires you to login with either your Facebook or Google+ accounts.

Giopi has to win a majority by collecting keys – each key represents helping a Republican campaign get more volunteers – while avoiding Taxers, who are evil-looking characters that are sent by Senate Majority Leader Harry Reid and President Obama to foil your plans. Along with this, players have to avoid or crush Mudslingers as well. The NSRC said, “To escape their false and empty rhetoric, jump on them and mute their misleading words.”

On their website, the NRSC said, “As a party, Republicans have a great opportunity to win the Senate majority and create positive change in Washington. This year’s Republican Senate candidates are the strongest in decades (if not ever), and we want to raise awareness in every possible way. With that in mind, we are having a bit of fun with our approach.”

It is an unusual medium to promote a political campaign, but is isn’t the first time it has been used by a political party. In 2008, Barrack Obama’s team launched an in-game ad campaign that featured in several games, including Need For Speed: Carbon.